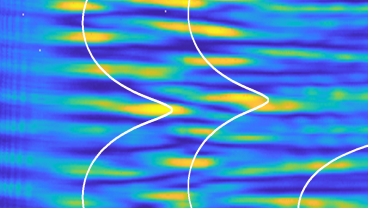 What is a “déjà-vu”? Could in a complex system a specific event from the past happen again in exactly the same manner that it appeared the first time? From a physical point of view, an analogous phenomenon was discovered by Fermi, Pasta, and Ulam more than sixty years ago and it is known as Fermi-Pasta-Ulam recurrence. Enrico Fermi, while working at the first computing machine that would then become the modern computer, unexpectedly found that certain nonlinear systems with many degrees of freedom interacting with each other, during their natural evolution, spontaneously return to the initial state in a cyclic way, apparently without ever reaching a final equilibrium state. The attempt to understand this recurrence has deeply influenced the entire development of nonlinear science and to date remains an open challenge known as FPU problem. In fact, although several theoretical pictures have been proposed, none of these has ever found experimental verification, mainly because nonlinear recurrences are believed to be extremely sensitive to any environmental perturbations that unavoidably characterize a natural system, such as noise and dissipation.

Now, a study performed by a group of researcher from the University of Rome La Sapienza, ISC of the National Research Council, Shenzhen University, Hebrew University of Jerusalem and Landau Institute for Theoretical Physics, whose corresponding author is Davide Pierangeli, have experimentally revealed how the Fermi-Pasta-Ulam recurrence originates in a specific collective motion of the system’s modes, which corresponds to particular exact solutions of the model equations. These exact recurrent solutions imply an infinite number of “déjà-vu”; these have been recently formulated by Grinevich and Santini in a general case that holds from optics to hydrodynamics. However, their observation was a matter of strong debate. Through a novel experimental approach that uses multiple optical interference in a nonlinear crystal to investigate how specific optical waves can reappear during laser light propagation, the researchers observe a record value of Fermi-Pasta-Ulam recurrences. For the first time, they are able to control the recurrent behavior and to explain it in terms of exact recurrences. Moreover, they show how the unstable dynamics of the optical field can be accurately tracked backwards to the specific wave that generated the recurrent motion.

These results shed a new light on the controversial and fascinating Fermi-Pasta-Ulam problem and represent a cutting-edge experimental test for nonlinear wave theory. The study open the route to novel perspectives for forecasting the evolution of wave chaotic systems, as well as for controlling various energy fluxes with extreme concentrations, from tsunamis to  localized plasmas and electromagnetic waves.

In the Figure: Fermi-Pasta-Ulam recurrence observed in the spatial distribution of light. The optical wave assumes a characteristic profile that disappears and then recurs during propagation (from left to right). White lines indicates the theoretical behavior predicted for an exact recurrence of this kind.